The roar of the wind and the beat of your heart

We are in the home of the blizzard praying for wind. 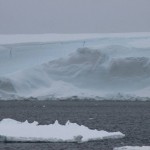 The Aurora Australis is ‘parked’ (as our Voyage Leader puts it) in the edge of the fast ice about 20 kilometres north of Commonwealth Bay. This is the first year in a century, probably much longer, that fast ice has prevented access by ship to Cape Denison. It’s because of iceberg B9B, of course, which last summer was still making its way west to its current place of grounding. It feels right that we have voyaged here via the new face of the Mertz Glacier, thus being confronted by the immensity of the evolving coastal geography of Antarctica, a continent that can shed a nation-state of ice overnight. For most of a day we detoured around B9B, an awesome, indeed stately, presence on our port side. This year, because of the new geopolitical posturing of B9B, Commonwealth Bay has filled up with sea ice as never before in human experience. Because the Mertz polynya is Antarctica’s greatest site of sea ice production (thanks to the blizzards), the fast ice here is thick and cured firm by the wind. So when our ship tested its strength last night, she did not get far into it. We now sit respectfully at its edge, a tiny orange fleck on the rim of the white desert. 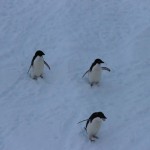 Douglas Mawson and Captain Davis spent much time sitting off Commonwealth Bay, just as we are doing, but their constant problem was wind, not ice. They always had ready access right into Boat Harbour, the little hook of water so close to the huts. It was those ferocious offshore katabatic winds that taunted, defied and so often defeated them, beating the Aurora back constantly. That happened most famously when Mawson staggered back to the huts on 8 February 1913, the lone survivor of his sledging journey, to see the ship on the horizon steaming north. He ordered Davis by wireless to return, but sixty-mile-per-hour winds prevented the Aurora and its motor launch from relieving the expeditioners. Captain Davis then made the difficult decision to leave them there for another year and to continue westwards so that he could rescue Frank Wild’s party before the approaching autumn entrapped the ship.

So just this year and just at this moment it is ice and not wind that has beaten us back. And low cloud is keeping our helicopters grounded. The airs are light and variable today, a rare state here, but the visibility is too poor for flying. Some wind might disperse the cloud. But be careful what you wish for… 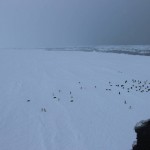 Antarctica is the windiest continent on earth and so it may seem paradoxical that it is also renowned for its silence. Silence is one of the most common metaphors of Antarctic life and experience. Of course the two are directly related, because silence in Antarctica is a period of non-wind, and the power of silence is heightened by the memory of the blizzard. Indeed, it is the after-shock of wind that can give silence its resonance. Mawson himself later analysed those rare ‘silences’: Such pauses – lulls of a singular nature – were a welcome relief to the dreary monotony [of the blizzard], and on such occasions the auditory sense was strangely affected. The contrast was so severe when the racking gusts of an abating wind suddenly gave way to intense, eerie silence that the habitual droning of many weeks would still reverberate in the ears. At night one would involuntarily wake up if the wind died away and be loth to sleep ‘for hunger of a sound’.

Mawson was writing of the contrast between sound and silence, and of the auditory memory of wind. But, living at Commonwealth Bay for two years, he learned that there was another source of distant droning, of muffled roaring. It was not just the memory of wind that was ringing in his ears. Mawson and his men gradually realised that, on the rare days when their own hut by the bay was becalmed, the ferocious katabatic winds continued to blow as usual about a thousand feet above them. So we came to realize that when a calm fell upon the Hut, the wind had merely retired to higher elevations and hung over us like the sword of Damocles, ready to descend at any moment.

But silence in Antarctica is not just a function of wind, and it is not merely an absence. Silence itself has a texture and a timbre; it can roar in one’s ears all on its own. The silence is palpable in Antarctica. Morton Moyes, the meteorologist at Frank Wild’s Western Base, spent almost nine weeks alone on the Shackleton Ice Shelf awaiting the return of sledging parties. He documented the silence in his diary. November 7: All alone here now and the silence is immense. December 20: The Silence is so painful now that I have a continual singing in my left ear, much like a Barrel Organ, only it’s the same tune all the time. When his companions returned and broke the silence, Morton Moyes stood on his head for joy.

And here is how Charles Laseron described the phenomenon of silence at the Main Base: In the middle of lunch we all become aware of something strange. Our ear-drums commence to throb as with a great noise. Somebody speaks and his voice cracks like a whip on the stillness. For the wind has stopped, and, accustomed as we are to its howl, the silence can literally be felt. For a while we speak almost in whispers, our heads are ringing and we feel very uncomfortable. … And the intense, utter silence – it seems as if the whole world is dead. The tinkling of a piece of ice falling in the distance rings out like a thunder-clap.

The Antarctic silence is also the space within which other, surprising sounds can be heard – the beating of one’s heart, perhaps, the thump of your very own pulse in your temples. It was said that Frank Wild had such a strong heart and booming chest that, if you happened to share a sleeping bag with him, you would be kept awake all night by the beating of his heart.