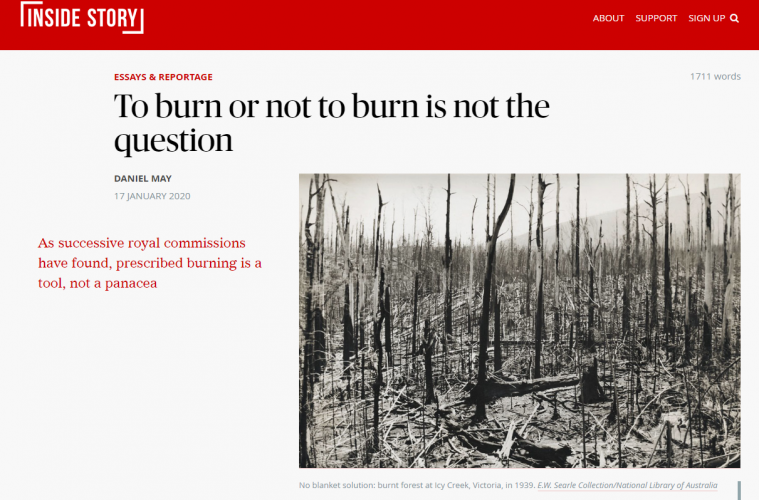 During five years of researching the history and politics of Indigenous burning, I have often found myself being pulled back towards debates about prescribed burning. This practice — also known as hazard reduction burning, control burning or planned burning — uses deliberately lit fire, under favourable conditions, most commonly to reduce the fuel available for future bushfires. Because Indigenous burning is often conflated with prescribed burning, I’m frequently asked an ostensibly simple question: does it work?

To say that experts, researchers and practitioners disagree about the answer is to put it mildly. Academic mentors have warned me to stay away, lest I be caught up in interminable debates and distracted from my main research. Among experts, suspicions about motives and trench mentalities abound, tied up with cross-disciplinary rivalries, political ideologies and implicit knowledge hierarchies. Your model versus my anecdote; your beliefs versus my facts. The debate can seem a like a black hole, sucking in and grinding up.

Fire management, and especially prescribed burning, has dominated public discussion in recent weeks. In this highly charged political context, I must admit to some scepticism about the calls for a royal commission or other inquiries. As the American fire historian Stephen Pyne has observed, fire is almost never considered on its own terms. Three bushfire royal commissions over the past century demonstrate how prescribed burning can become a proxy for other political issues.

Continue reading at Inside Story