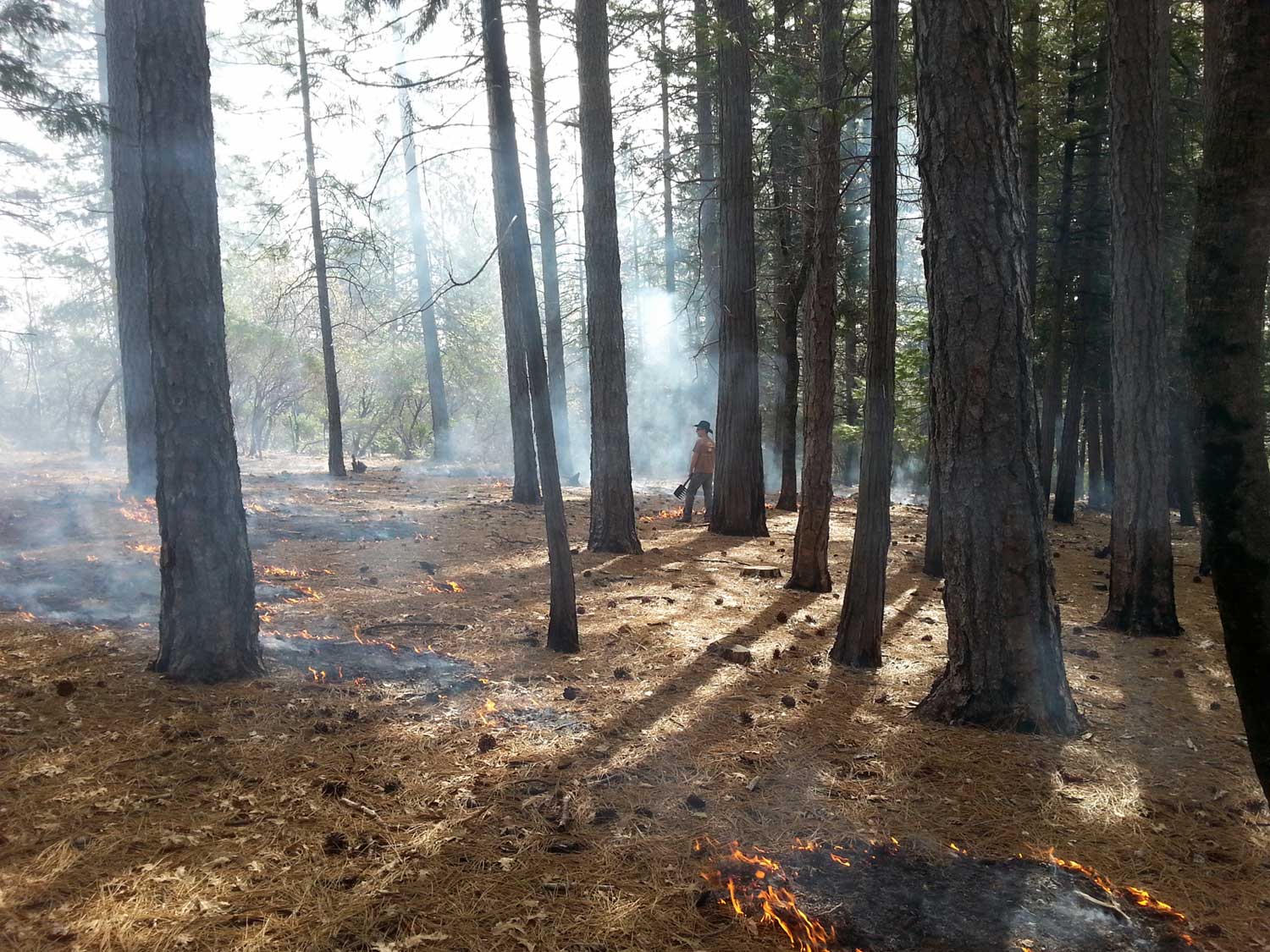 STILL like statues, we leaned on our tools and watched the flames spread. Traditionally, fires can be associated with destruction and violence. This fire was slow. It trickled rather than roared. We burnt downhill, against the wind, occasionally raking ahead or behind, or shaping the flames to control the burn. These were our tools: rake and leafblower, match and driptorch, and most of all – patience. I have learned many things since leaving Australia in March, but the peace of watching this fire sticks with me.

I’m here as part of my Endeavour Research Fellowship to support my PhD research into the politics of Aboriginal Australian and Native American burning. My host is Professor Don Hankins, a geographer at California State University (Chico) who has unique insights into Miwok Native American, Aboriginal Australian, and Western fire practices. It’s odd to hear Aboriginal English banter spoken with an American accent, and to travel 7,000 miles from home only to enjoy a welcoming Tim-Tam and Bundaberg ginger beer. Shortly after I arrived, he took me out for a burn.

Don has described using fire as ‘painting the landscape’. This canvas is different to what I know – hummingbirds dart and hover, manzanitas replaces the eucalypt, and I’m on guard for poison oak rather than brown snake. It’s so alien that when I first heard a woodpecker I thought it was the sound of Arnold Schwarzenegger’s opponent in Predator. Yet the basics of this art remain the same. 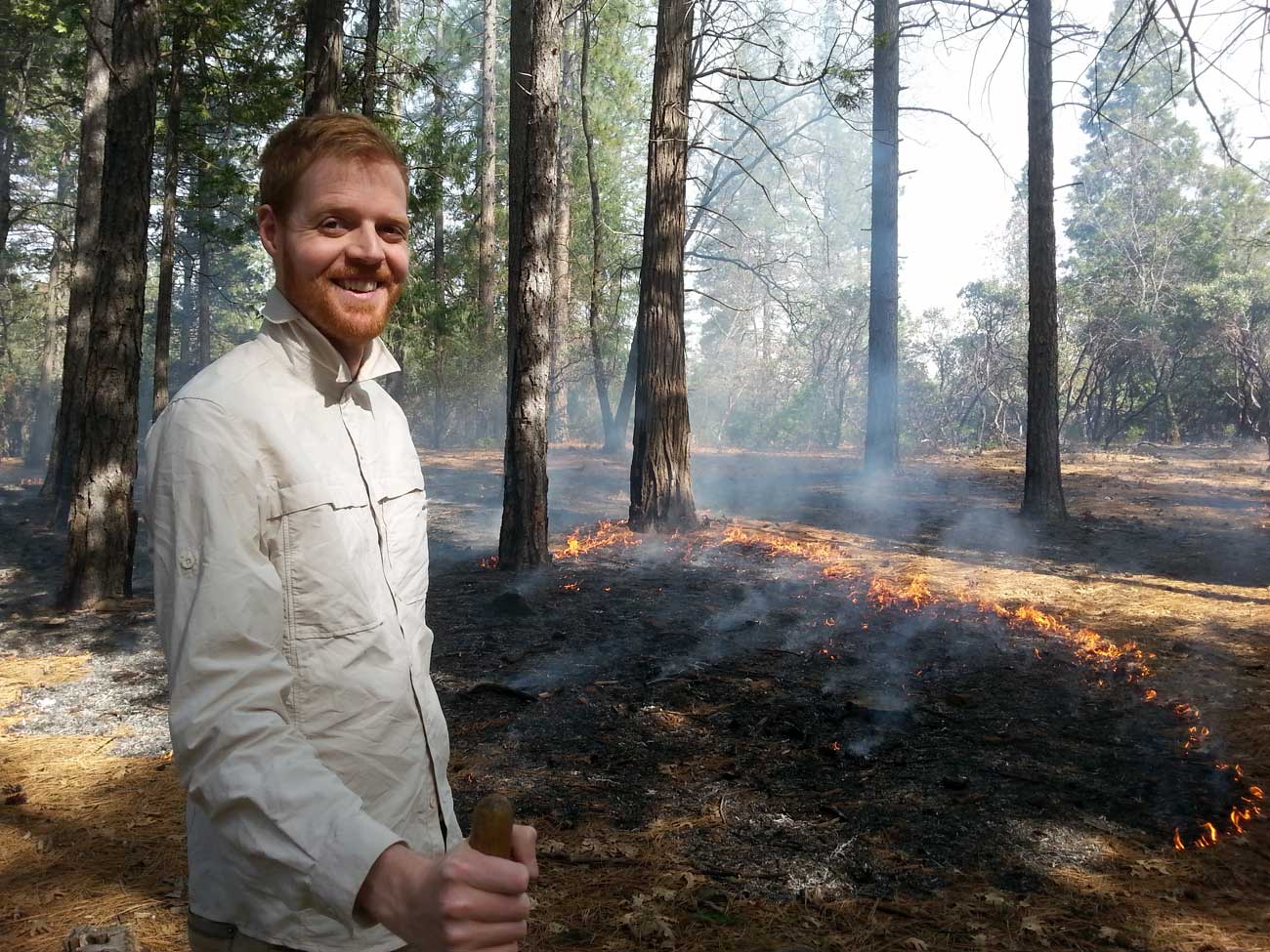 It hasn’t all been burning. I began my trip by attending the American Society for Environmental History (ASEH) annual conference at Riverside. It was incredible to be surrounded by hundreds of environmental historians, to put faces to names, make connections, and listen to some cutting-edge research. It was also an opportunity to reflect on differences between American and Australian environmental history. ASEH’s opening reception began with a Native American welcoming ceremony – though I was told this was not normal practice, and in general there seemed to be far less research interest in indigenous history than might appear at the Australian Historical Association annual conference. This may not be a fair comparison (there is no annual Australian Society for Environmental History conference), but from my conversations and readings I would agree with Professor Tom Griffiths that Australian environmental history pays much more attention to Aboriginal history.[1] Another difference was the number and variety of workshops available, that covered everything from crafting a CV to using technology to teach environmental history.

A real highlight was a tour led by Professor Stephen Pyne, the world’s foremost fire historian. Steve demonstrated examples of the incredible topography of SoCal, where “chimneys” of steep valleys interact with shifting winds to drive fires of increasing intensity. A visit to the Southern California Geographic Area Coordination Centre threw up the stark differences between the resources available for Australian and American fire management. It was a cold, rainy day yet there were still two spotting planes shown patrolling California.

SoCal dominates fire practice just as it dominates the popular imagination of California, yet it was not always this way. In the early twentieth century it was Northern California that shaped Californian fire practice and policy. I presented to the Northern California Prescribed Fire Council, a loose alliance of community groups, academics, landholders, land managers, and government agencies seeking to share knowledge and increase the amount of prescribed fire on the landscape.

At this meeting Dr Eric Knapp read some arguments voiced during the ‘light burning’ dispute of the first few decades of the twentieth century. Light burning was a catch-all term used largely in a derivative fashion by the agents of fire suppression in the newly-formed US Forest Service. Foresters such as William Greeley confidently denounced it as unscientific, and racially disparaged its ties to Native American pre-Columbian practices as ‘Piute Forestry’.[2] Nearly a century later, the self-righteous dismissal of prescribed burners as ‘incendiarists’ was met with open laughter in the room. It was a surreal moment.

During this conference I also had the opportunity to hear about various initiatives in the Klamath region, where tribal burning has been slowly reintroduced. Just as with the ‘cultural burning’ movement slowly spreading across Australia, fire is being reintroduced to the landscape for a variety of objectives, including indigenous purposes. Most importantly, this is being done through partnerships with local indigenous individuals and groups. The cultural politics can be complex and fraught; and it’s been fascinating to learn that despite the different governmental systems in Australia and the US, there is active collaboration and knowledge sharing between indigenous groups about cultural burning. The assertion of sovereignty and culture through fire is happening at a local level; no grand treaties are in play, just painstaking day-to-day negotiations and renegotiations.

Tracing the path of the light burning dispute and its links to Native American practices has involved archival visits. The California State Board of Forestry, for instance, spent many years disparaging light burning, and especially the relevancy of Native American practices. From reading the Board’s private publications and research papers, it is clear to me that this dismissal, supposedly based on scientific study, was in fact lacking any real evidence either way and heavily tainted by prejudice. 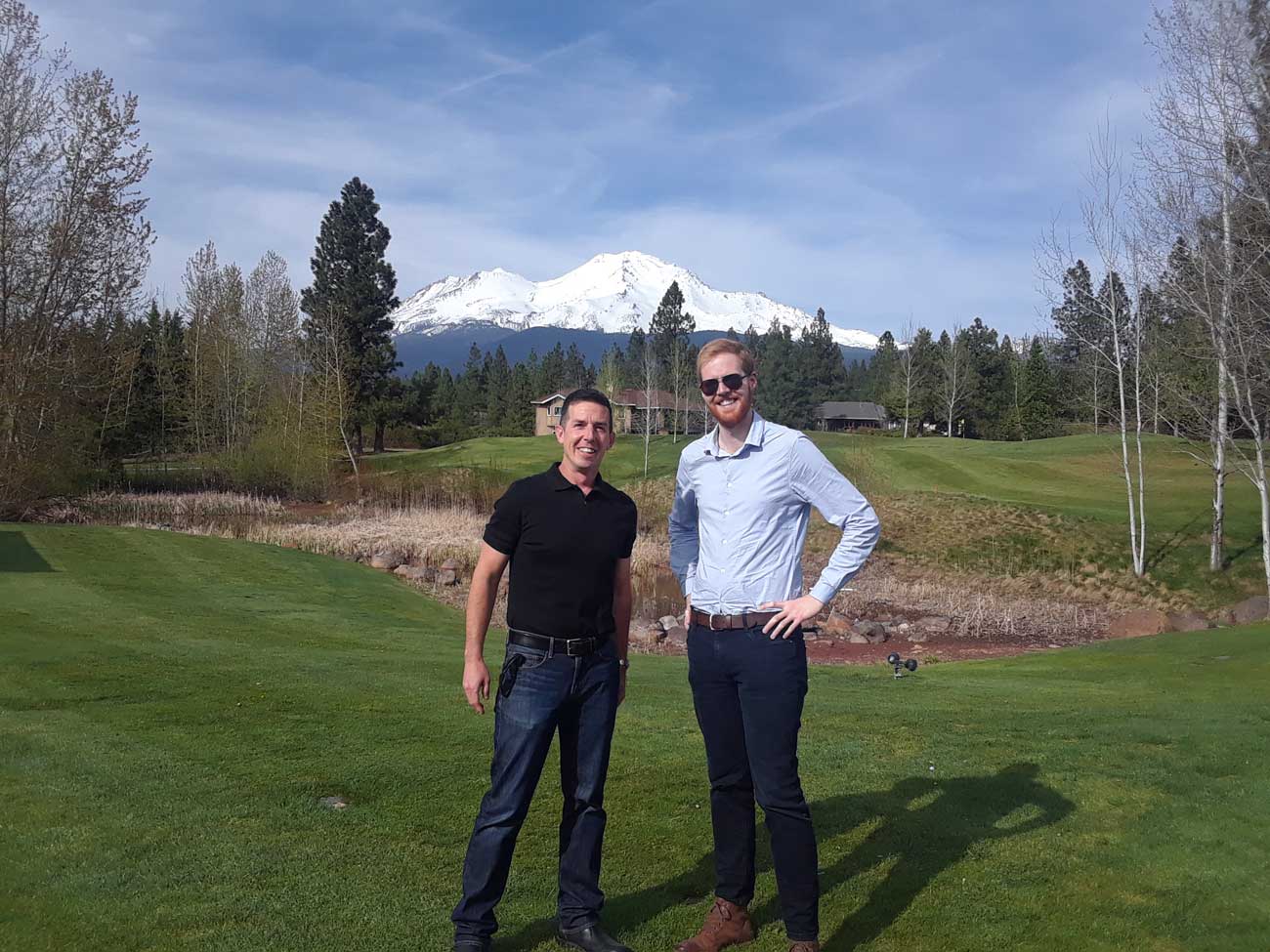 At Mt Shasta for the Northern California Prescribed Burning Council

Just as UC Berkeley was a centre of radical social protest in the 1960s (and still is, judging by the “Resist” posters scattered throughout the campus), under scientists such as Harold Biswell, it was also a centre of radical fire protest. Through a series of experiments in prescribed burning, Biswell challenged the Forest Service orthodoxy on fire suppression – and from reading his papers, it’s clear he butted heads against American environmentalists. American environmentalism has always had an obsession with ‘wilderness’; an obsession, I now strongly suspect, that has politically hamstrung the movement given the increasing evidence and public awareness of pre-Columbian environmental management practices.

As I write this, California has well and truly entered Summer. 2017 was one of its worst fire years on record, merely the latest in a series of ‘bad years’. On his fire tour Pyne introduced us to the Del Rosa ‘hotshots’, a famed firefighting crew who grimly referred to a ‘13-month fire season’. Climate change is influencing this – but it’s not all factors outside human control. SoCal is the poster child for the ‘world wildfire problem’ – the seemingly inexorable spread of the wildland-urban interface.[3] This cannot be solved through technology at any practical cost. California is the land of superlatives, with big money, big egos, and, increasingly, big fires. News media publish glitzy stories of unmanned aerial vehicles (drones), huge tankers and helicopters. Yet year after year the problem gets worse.

Some weeks after Don and I burnt, I revisited the burnt ground and saw a movement from the corner of my eye. A turkey had been attracted by our fire and was searching through the ash for new growth. It may have made for less dramatic TV than helicopters circling above Malibu, but I can’t help thinking images like this are what Californians could associate with fire.