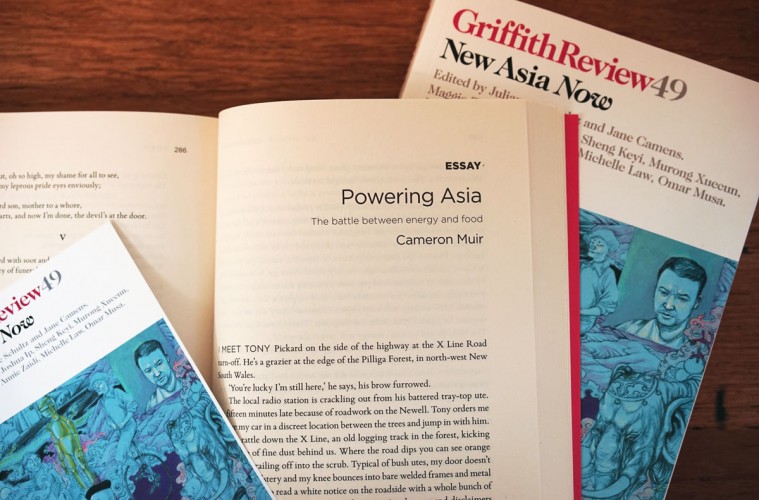 Farming versus mining in Griffith Review

Read Cameron Muir’s essay ‘Powering Asia: the battle between energy and food’ in the latest issue of Griffith Review.

Asia’s middle class is roughly twice the size of the US’s population. In the next five years it will triple. This essay explores the clash between mining and agriculture, environment and profit in a planet demanding more food and energy than ever before.

I MEET TONY Pickard on the side of the highway at the X Line Road turn-off. He’s a grazier at the edge of the Pilliga Forest, in north-west New South Wales.

The local radio station is crackling out from his battered tray-top ute. I’m fifteen minutes late because of roadwork on the Newell. Tony orders me to leave my car in a discreet location between the trees and jump in with him.

We rattle down the X Line, an old logging track in the forest, kicking up a plume of fine dust behind us. Where the road dips you can see orange sand creeks trailing off into the scrub. Typical of bush utes, my door doesn’t have any upholstery and my knee bounces into bare welded frames and metal panelling. I try to read a white notice on the roadside with a whole bunch of black and red text saying something about restricted access and disclaimers and dates, but we pass too quickly.

It’s easy to lose your bearings in the Pilliga with its endless low canopy of eucalypts and pine. I’m trying to visualise the map of criss-crossing roads I had in my car but I have no idea where we are now. At a narrow driveway Tony pulls up then turns in. It runs parallel to a silty fill line covering an underground gas pipeline, with postcard-sized caution markers flapping in the breeze at regular intervals. Further in, behind hurricane fencing, is a coal seam gas water-treatment plant, lined tanks and an old well pad. Bibblewindi-1. This is what Tony brought me to see.

AT 3 PM, on 5 January 2015, the LNG tanker Methane Rita Andrea pushed off the new wharf at Gladstone Harbour, bound for Singapore. A small gathering of locals dressed in shorts and sunglasses watched from the shore, marking the occasion with a few murmurs and claps, and clicks with their bulky cameras. This was the first consignment of liquefied natural gas processed at Curtis Island’s $60 billion super facility, drawn from gas fields connected by thousands of kilometres of pipelines stretching across eastern Australia. Previously, this side of the continent could only supply the domestic market, whereas LNG tankers will soon depart Gladstone every day of the year, destined for Japan, China, India and Singapore. Then Queensland Treasurer Tim Nicholls said his state’s energy will ‘power the world’.

However, the rush to new fossil fuel projects is giving rise to a clash between mining and another of humanity’s most fundamental industries – agriculture. Arable land is scarce. All the earth’s land that is good for farming is already under crop. In a planet facing constraints, with populations demanding more energy and food than ever before, will we be faced with a bleak future – a choice between mining and dining, between turning on the lights and eating our breakfast?

Read the rest at Griffith Review