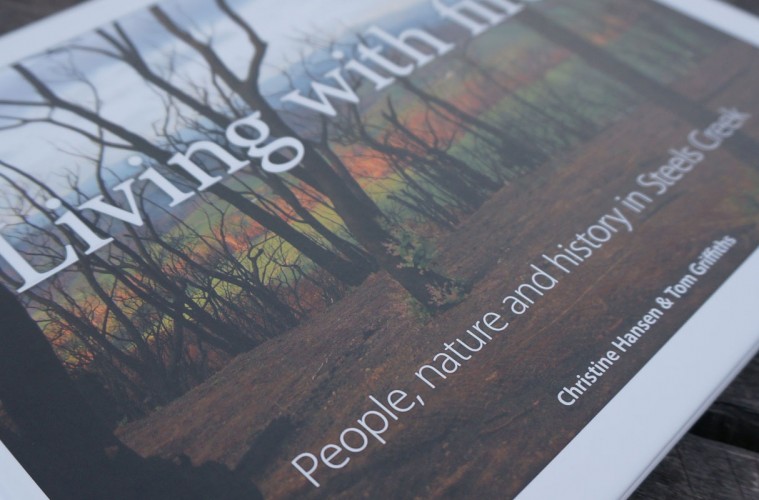 Living with Fire
People, Nature and History in Steels Creek

On 23 November 2012, a new book by Christine Hansen and Tom Griffiths was launched in one of the communities that suffered on Black Saturday.  Entitled Living with Fire: People, nature and history in Steels Creek (CSIRO Publishing), the book is the result of collaboration with people of the Yarra Valley who survived the firestorm and want to rebuild their lives and sense of community identity.

Eighty residents of Steels Creek and neighbouring areas gathered on a beautiful evening at the Steels Creek Community Centre, the former primary school, to celebrate the completion of the book.  Living with Fire is produced in full colour throughout and features local photography and art, historical photos, case studies of how families have rebuilt their homes to live with fire, and an analysis of controversial policy issues arising from the firestorm and the subsequent Royal Commission.  Christine and Tom have also written a micro-history of Australian settlement, exploring the deep social and environmental history of the valley over millennia.

View photos from the launch at Steels Creek, Victoria on Friday 23 November 2012.

Below is the back cover blurb from the book:

Late on the afternoon of 7 February 2009, the day that came to be known as Black Saturday, the Kinglake plateau carried a massive conflagration down the fringing ranges into the Steels Creek community. Ten people perished and 67 dwellings were razed in the firestorm. In the wake of the fires, the devastated residents of the valley began the long task of grieving, repairing, rebuilding or moving on while redefining themselves and their community.

In Living with Fire, historians Tom Griffiths and Christine Hansen trace both the history of fire in the region and the human history of the Steels Creek valley in a series of essays which examine the relationship between people and place. These essays are interspersed with four interludes compiled from material produced by the community.

A deeply moving book, Living with Fire brings to life the stories of one community’s experience with fire, offering a way to understand the past, and in doing so, prepare for the future.

Read a fascinating edited extract in Inside Story.