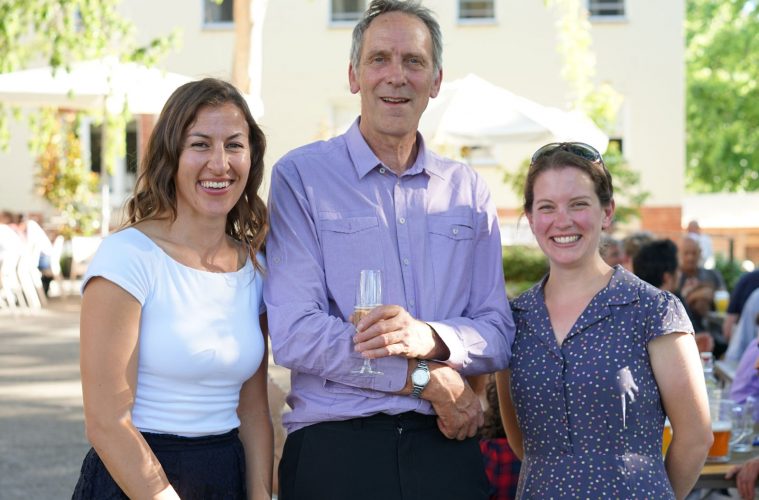 Three members of the Centre for Environmental History celebrated their graduations at the Australian National University’s Conferring of Awards ceremonies in December.

Ted Deveson, for his thesis, ‘Plagues and Players: an environmental and scientific history of Australia’s southern locusts’

Diane Erceg, for her thesis, ‘On Antarctic Tourism & The Making of Experience.’

Jayne Regan, for her thesis, ‘National Landscapes: The Australian Literary Community and Environmental Thought in the 1930s and 1940s’.

Read the abstracts below. 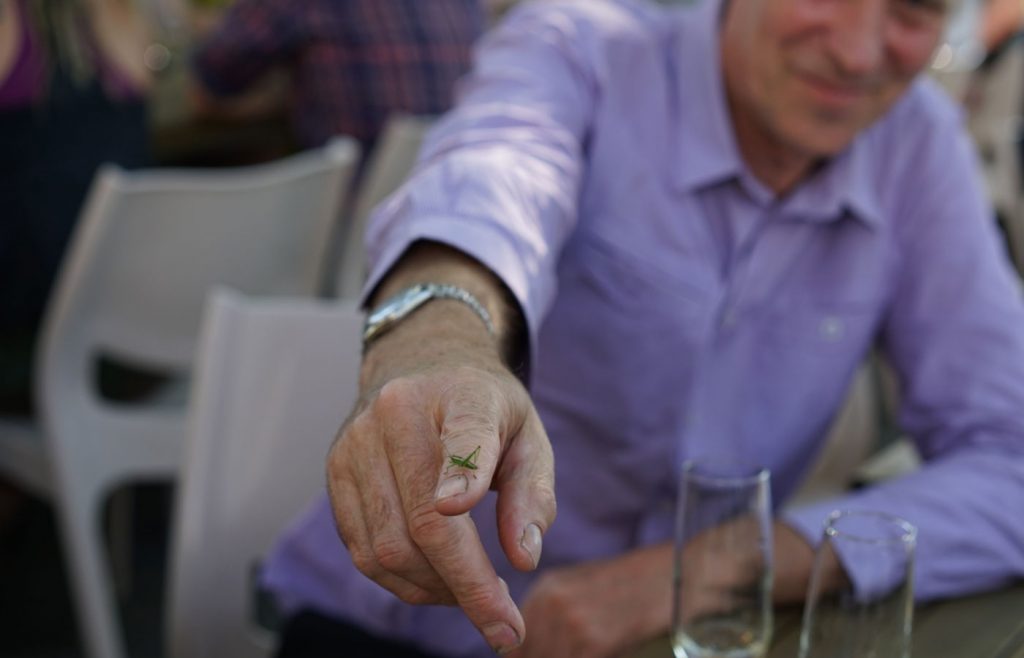 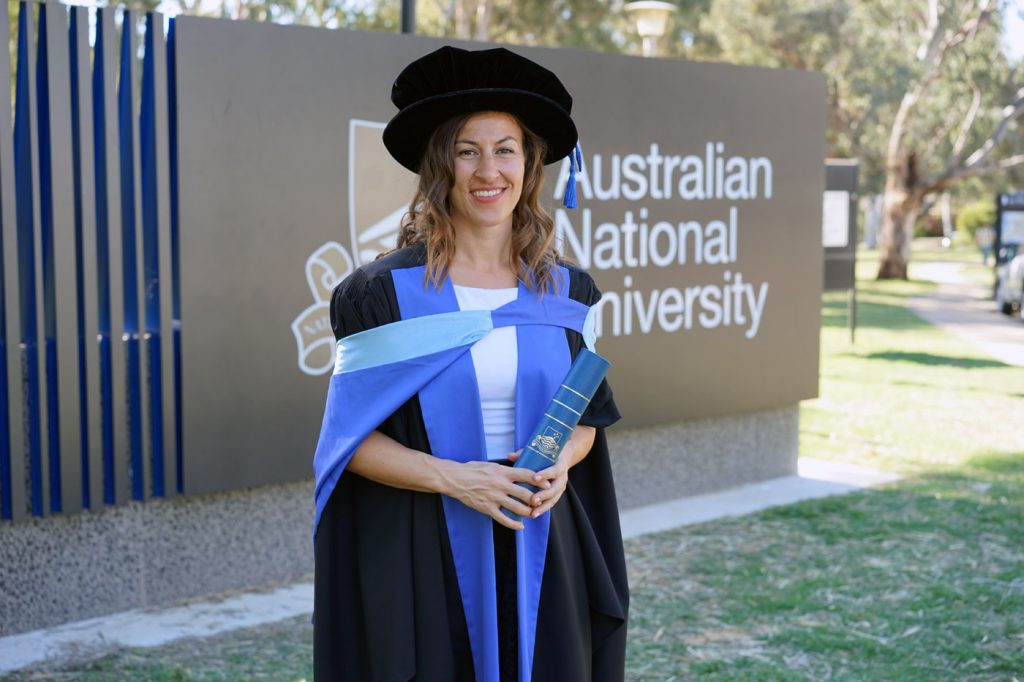 Diane on her graduation

Plagues and Players: an environmental and scientific history of Australia’s southern locusts

This thesis traces the changing course of locust and grasshopper outbreaks in southern Australia and relates them to environmental changes. It also examines the creation and use of scientific knowledge about locusts over more than a century of research. Together, these historical investigations show how the insects’ responses to environmental change influenced the course of ecological and agricultural science.
Digitised newspaper records of locust occurrence allow a more complete reconstruction of historic plagues and a new interpretation of the species involved and the environmental correlates of their changing incidence. They also provide a different view of the scientific players who investigated locusts in Australia. These sources are complemented by the writings of many entomologists about locust outbreaks and ecologies from the 1840s to the 1970s. The popular and scientific sources reveal the complexity of ecological ideas, technologies and institutional settings, framed by the common material context of environmental change. This is a history of entomological, ecological and public agricultural science as well as an analysis of the environments in which the outbreaks developed.

European settlers encountered grasshoppers and locusts soon after establishing pastoral and agricultural land use. Swarming populations developed patterns of occurrence that were observed by farmers and naturalists, and there is evidence that their incidence increased during the nineteenth century. Two species, Austroicetes cruciata and Chortoicetes terminifera, developed frequent outbreak populations on the southern grasslands, making them significant agricultural pests, but they responded differently to changes of climate, landscape and land use. The former swarmed almost annually soon after livestock altered grassland ecosystems within its range, but it declined during the twentieth century. The latter first swarmed across the southern grasslands in the 1870s, but has since maintained irregular outbreak populations through migratory exchanges.

They are taxonomically related native locusts with a similar appearance but distinct ecologies. Untangling their identities was historically marked by scientific confusion. However, the two species can sometimes distinguished in newspaper reports by diagnostic morphological features and can often be separated by differences in their seasonal occurrence, abundance, phenology and behaviour.

This thesis argues that the fundamental changes to grassy ecosystems resulting from the rapid expansion of the pastoral industry favoured the development of swarming populations of both Australian species. Evidence comes from early Aboriginal comments, thousands of newspaper and official reports, climatic sequences and the nature of landscape changes, as well as the subsequent contraction in outbreak extent and frequency when land use and land cover stabilised in the second half of the twentieth century.

The writings of many investigators reveal overlapping trends in ecological and technological investigations, and place each player within their scientific era. These are examined in the context of international developments and the broader public discourse about locusts and the importance and relevance of science. In this long relationship of feedbacks, the materiality of the insects allowed scientists to discern their ecologies. Science directed government policy on how to respond and governments sponsored more science in managing the politics of the successive agricultural crises.

National Landscapes: The Australian Literary Community and Environmental Thought in the 1930s and 1940s

In 1944 Nettie Palmer, a leading figure in the Australian literary community, asked ‘what is the human value of this last Continent, which stepped straight into the age of industry, world-communications, world-wars, and accepted them all?’ Her question, posed at the height of World War Two, captures well the anxieties that drove Australian literary production across the 1930s and 1940s. During these decades the atmosphere of international catastrophe mingled with a variety of distinctly Australian colonial insecurities and incited a literary effort to enhance the country’s cultural ‘value’. Writers set themselves the task of ushering in an era of cultural ‘maturity’ in Australia as a bulwark against a variety of perceived external and internal threats. This thesis explores the ways that the Australian environment was co-opted into this mission. I argue that unlocking the supposedly untapped and elusive spiritual and material potential of the continent was considered a critical step toward both economic prosperity and national and cultural adulthood.

Writers responded to environmental events and problems that were specific to the 1930s and 1940s: their writing registered changing approaches to closer settlement, the rise of institutionalised science, the environmental implications of new technologies and an emerging ecological consciousness. Their imaginative engagement with these processes – available to us in the books, poems, stories and letters they left behind – reveal the ways that contemporary environmental issues provoked and deepened literary concerns about white Australian belonging on the continent.

This thesis is a fusion of historical, literary and environmental approaches. I highlight specific authors – Nettie Palmer, Henrietta Drake-Brockman, Frank Dalby Davison and Brooke Nicholls, M. Barnard Eldershaw, Ian Mudie, William Hatfield and Flexmore Hudson – who wrote directly or indirectly about the Australian landscape in the 1930s and 1940s. Although they did not always share a unified environmental, political or even literary sensibility, this cohort was united by a sense of the social responsibility of writers and a desire to locate in Australia’s varied landscapes a national culture that they hoped would prove robust in the face of the catastrophes of the early to mid-twentieth century.